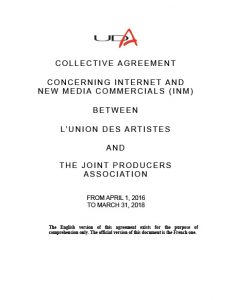 ACA, along with Association of Creative Communications Agencies (A2C) and the Institute of Communication Agencies (ICA), negotiated the first-ever Internet and New Media Agreement with the Union Des Artistes, finalizing it in April 2016.

View a version of the agreement