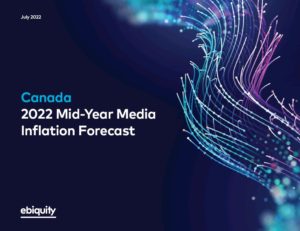 The following is Ebiquity’s Canadian mid-year inflation forecast update, developed via a survey conducted among Canada’s leading media agencies, and building upon an original forecast developed by Forde-Semple MediaWorks (now Ebiquity Canada). This update takes into account both subtle and outside the ordinary shifts seen as the year unfolds. This data is a forecast only, and not intended to dictate the level of fees paid to agencies in
any way, which are entirely the subject of individual negotiation.