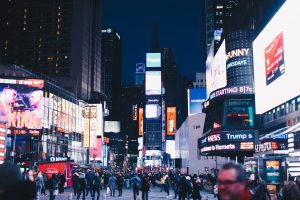 It may be an online world, but out-of-home (OOH) continues to shine.

At a recent ACA webinar, Lara Menzies, Head of Marketing at Canadian Out of Home Marketing and Measurement Bureau (COMMB), shared stats on the growth and effectiveness of OOH, as well as best practices for creating highly engaging OOH campaigns.

Many consumers take action after seeing an OOH ad, according to Nielsen’s Out-of-Home Advertising Study (2019). For example, 28% watched an advertised movie in the theatre; 23% talked about the ad or product with others; and 19% visited a store of a business advertised.

So, how do marketers get the most out of their OOH campaigns? Here are a few best practices Menzies shared with the audience:

Distill your messages to one point. For example, a Tim Hortons ad during last year’s hockey playoffs had a picture of a Boston Cream donut and the text, “Cream Boston.”

Engage with your audience

The use of digital and dynamic messaging increases personal relevance, drives a call to action, and boosts brand consideration and purchase. For example, a Game of Thrones campaign encouraged fans to share their predictions on Twitter for the final season, and Twitter used the opportunity to launch 20 new emojis.

Be contextually creative using your environment

Consider the location your ad will be viewed in. For example, a BMO ad for a reward miles credit card was placed on stairs in between two subway escalators and featured the text, “Stop Climbing. Start Flying.”

Humour, intrigue and aesthetic design are all effective styles when using out of home. For example, a tongue-in-cheek campaign in L.A. for The Grinch premiere featured copy such as “Of course you’ll make it as an actor.”

This will help attract eyes to your billboard and improve retention of your message. Colour combinations with high visibility include black on white, blue on yellow, white on red, while those with poor visibility include yellow on red and purple on black.

ACA members can view the slide deck and listen to a full recording of the webinar.

Tags: OOH advertising Out of Home